On May 14, 1956, the North Carolina Annual Conference of The United Methodist Church met in Goldsboro and approved a petition from the people of Rocky Mount to locate a college in their community. In early September, the first trustees established temporary headquarters in the Ricks Hotel. One of the first actions of the Board was to name the institution North Carolina Wesleyan University. The College was officially chartered by the State of North Carolina on October 25, 1956. 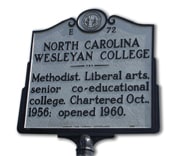 Capital investments totaling approximately $2 million made possible the construction of the main buildings on the 200-acre site donated by the M.C. Braswell heirs of Rocky Mount, and four years later 92 students enrolled in the first class at North Carolina Wesleyan University. In 1964, 33 students received their degrees at the College’s first Commencement. 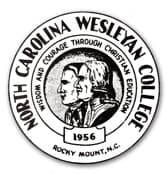 Whose hearts and minds unite in soul,

Whose freedom teaches self-control, A gift which we inherit.

Confirmed in these unrivaled years. Of learning, laughter, and of tears,

Of yearning hope amid our fears, We praise thee for thy spirit.

Wesleyan, our Alma Mater, Now we join with voices raised;

May thy name be blessed in singing, And by grateful lives be praised.