The University’s Spring Commencement will be held on Saturday, May 6, 2023 at the Rocky Mount Event Center. More details and guest speaker information coming soon. 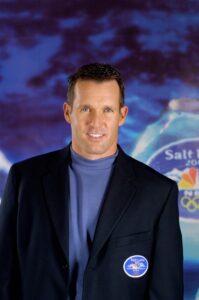 Jansen became the World Sprint Champion in 1988 and then competed at the 1988 Winter Olympics in the 500- and 1,000-meter races. In the early hours of February 14, the day of the 500-meter event, Jansen was informed that his 27-year-old sister, Mrs. Jane Marie Beres, was dying of leukemia. Hours later, Jansen was notified his sister had passed. He went on to compete in the 500-meter race that afternoon, but fell in the first turn. Four days later in the 1,000-meter event, he began with record-breaking speed but fell again, just past the 800-meter mark. He left the 1988 Olympics with no medals, but became the recipient of the U.S. Olympic Spirit Award for his valiant efforts.

In 1993, Jansen set a world record in the 500-meter event and was cast as a favorite to win gold at the 1994 Winter Olympics. Between the 1992 and 1994 Olympics, Jansen was the only skater to break 36 seconds in the 500 meters, doing so four times. In 1994, Jansen won his second World Sprint Championship title.

At the 1994 Winter Olympics he finished eighth in the 500-meter event. In preparation for the 1,000-meter event, he was coached by Peter Mueller, who won the same event in the 1976 Winter Olympics. Jansen defied expectations, finishing first to win the only Olympic medal of his career, setting a new world record in the process. He received the 1994 James E. Sullivan Award and was chosen by his fellow Olympians to bear the U.S. flag at the closing ceremony of the 1994 Winter Olympics. He was elected to the Wisconsin Athletic Hall of Fame in 1995.

Parking at the Event Center

The attached map outlines parking directions for all graduates.  All graduates will park in “Lot A” or “Lot B” at the rear entrance of the Event Center. Please bring your student ID if possible to show to the officer that will be working “Lot A” and “Lot B”.

There will be additional parking around the facility for your friends and family. View map of RMEC parking.